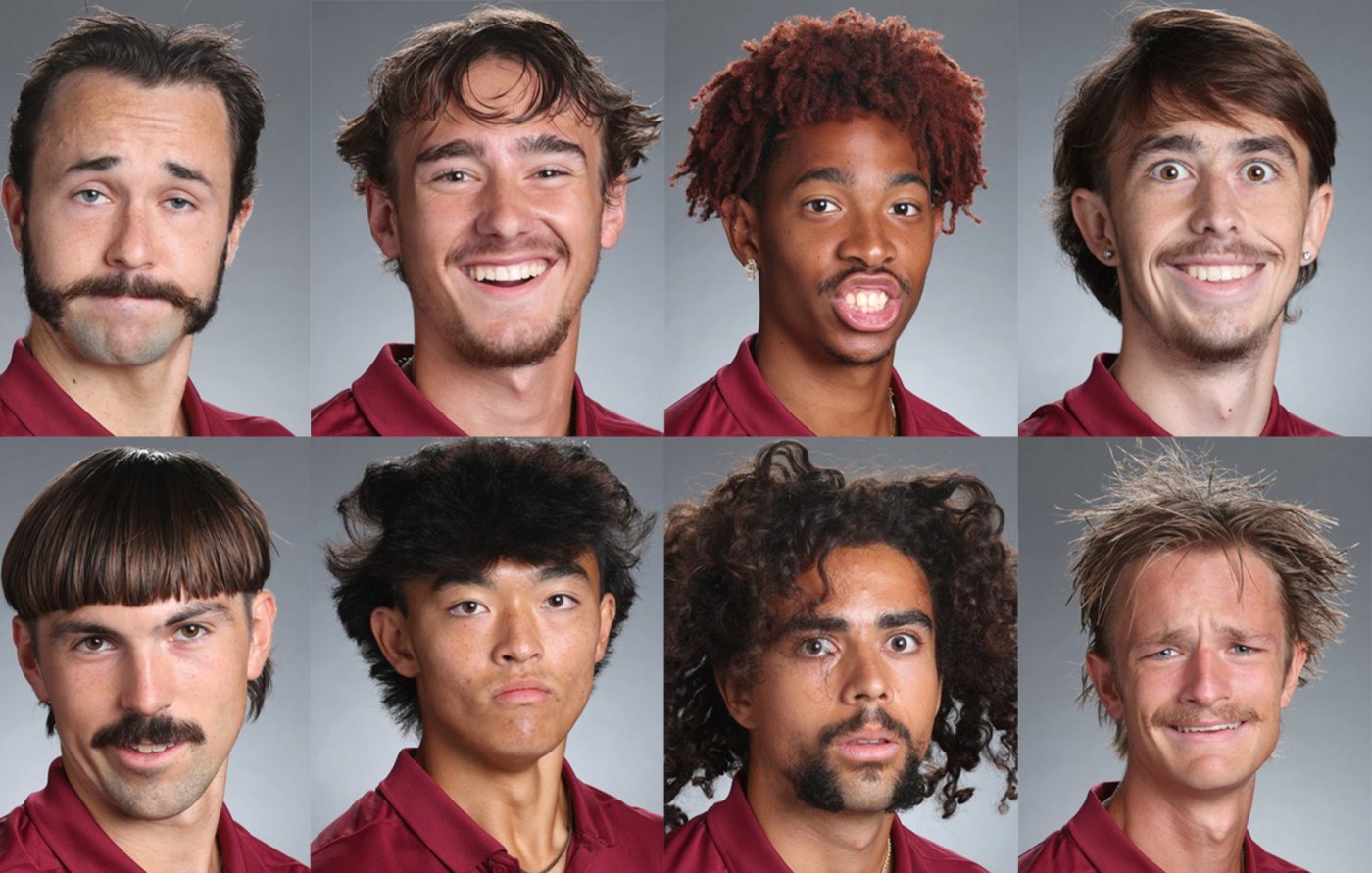 Imagine being a graduating high school senior who is going to Santa Clara to run on the men’s cross country team. You’re excited to meet your new teammates and get to know them, especially once you get added to a team-wide group chat months before you’ve even officially stepped foot on campus.

In that chat, there are three main things that get discussed: your training, your fitness level … and your mustache.

It was the ‘staches that sent social media into a frenzy, with posts about the Santa Clara men’s cross country team’s headshots garnering hundreds of thousands of likes on both Twitter and TikTok. And for the Bronco runners, it’s made them into campus celebrities.

“I’ve had so many people come up to me at school — professors and friends and complete strangers in the street — and say, ‘Oh my god, you’re the Santa Clara cross country guy with the bowl cut who looks like Anthony Kiedis,’” senior Harvey Chilcott said. “Just crazy things have happened.”

Senior DeVon Dupree, an alum of Archbishop Mitty in San Jose, added, “Literally as me and Harvey were walking here [to do the interview], some guy goes, ‘Oh my god, you guys went viral.’”

The moment of virality has only just happened and may be gone again soon. But the growing of mustaches for team photo day is a Bronco cross country tradition that goes back at least a decade, meaning even the longest-tenured runners on the program remember what it was like discovering the array of portraits as a high schooler interested in the program.

“When you’re getting recruited and you look at the roster pictures, you feel like, ‘I feel like some of these have to be a joke,’” redshirt senior Zach Litoff said.

Yes, it is a joke, but yes, they very much are the real photos the runners use for their headshots on the Santa Clara website. It’s why the mustache talk begins months before team photo day, to give the more follicly challenged teammates time to grow whatever they can on their upper lip. Litoff admitted he needed all three months to grow a mustache for his freshman year picture.

“This is one of the lasting [traditions] too, because you get pictures of it forever,” Litoff said. “Every year, you go back and look and see the growth you’ve had since freshman year — both literally,” — as in, more hair for the ‘stache — “and in how much funnier the pictures can be.”

Dupree can attest to that with his photo this year.

“When I took my picture, [the photographer] was like, ‘Oh, that’s a really unnatural style. Are you sure you want to keep that?’ And I couldn’t even look him in the face because I was laughing too hard. I was just like, ‘Yeah, I think it’s good.’”

Santa Clara’s mustachioed roster was well known within the running world, thanks especially to Citius, a website that focuses on covering the running world. Founder Chris Chavez remembered doing a roundup of the goofy pictures that collegiate cross country runners have taken at photo day over the years, with Santa Clara being the one program that always stood out.

“We did a whole roundup of the team portraits [in 2018] and it was a hit,” Chavez said. “Year after year, they kept the tradition going, and I would say the latest round of headshots are some of their best work.”

Admittedly, the world of running surely brings out the goofballs, with Chavez recalling the famous – or infamous? – cross country saying: “My sport is your sport’s punishment.”

But since cross country is a team sport, it helps to have cohesion. And while the viral tweets showed a dozen of the team members, the website featuring the entire roster shows the silliness didn’t just come from one of two. It was the whole team.

“We’re all pretty goofy guys,” Chilcott said. “We’re all a great team and there’s a lot of team chemistry that goes on. It was really great that we could all engage with it and really buy into it as a team.”

And now, even though many of the Broncos have trimmed or shaved their mustaches or crazy hair-dos, they’ve gained popularity and a bit of notoriety on the Jesuit campus. They hope that can translate to more love for cross country runners.

“The sport doesn’t really get that much recognition in general, so it’s really cool that people are interested,” Dupree said. “All the comments like, ‘My new favorite team,’ or, ‘I’m really cheering for Santa Clara this year,’ or trying to learn more about us is really cool.”

The Broncos are in the middle of their season and are hosting a meet in nearby Sunnyvale in mid-October. Typically, men’s college cross country teams grow a “playoff mustache” for the November championship meets, concluding with the national championship in Stillwater, Oklahoma.

Could we see a full team return of the mustache?

“That’s one of our goals,” Litoff said. “If we make it to nationals this year, we’ll definitely have mustaches back.”

Calif. Governor Newsom on plan to address California’s homeless issue: ‘We are giving them hope’