Shanahan, Garoppolo, others speak after loss to Broncos 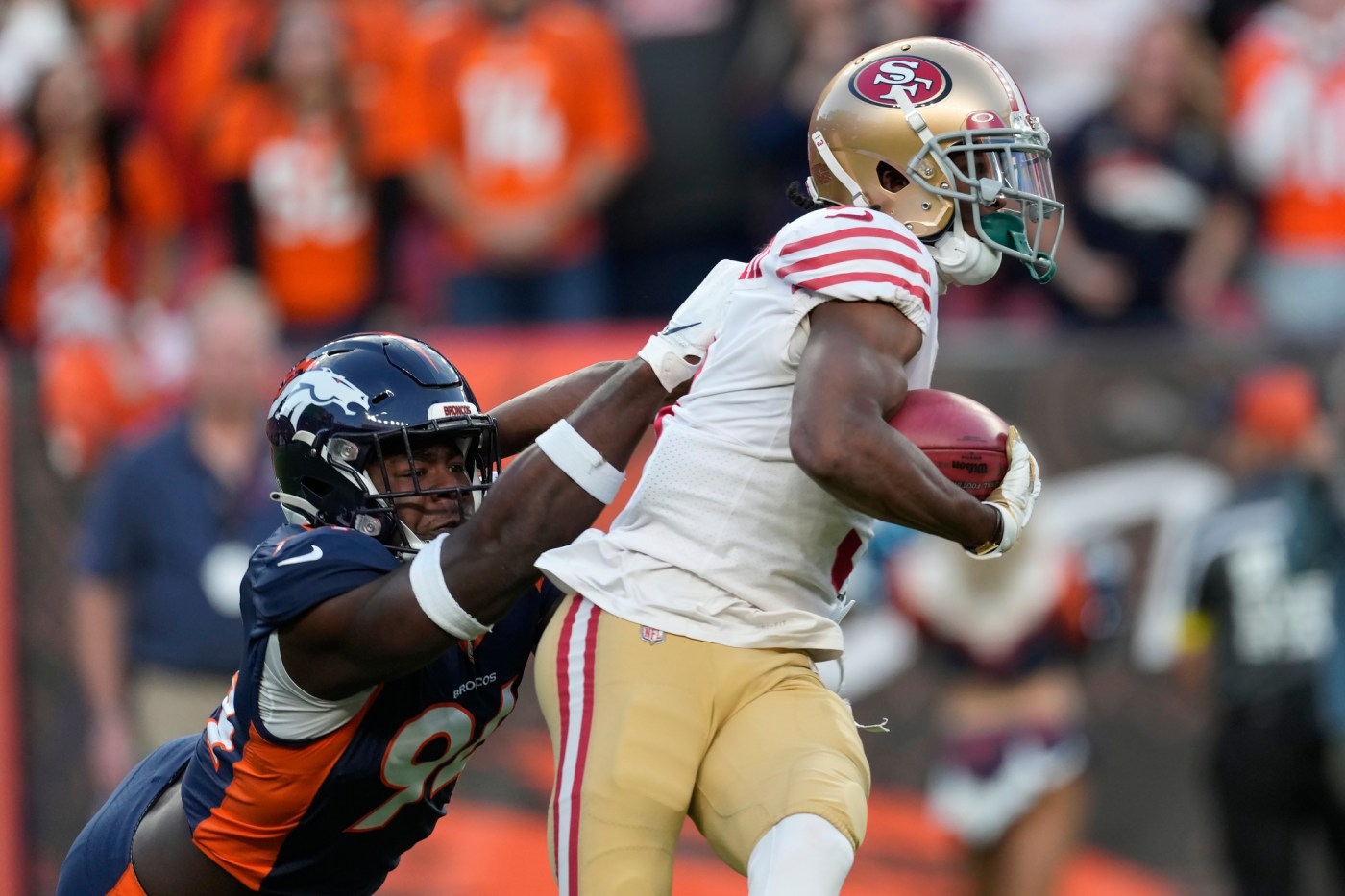 The 49ers dropped their first prime-time game of the 2022 season, beaten by the Broncos and former NFC West foe Russell Wilson in an 11-10 Sunday night affair.

The Niners’ defense, stalwart all night long, relented on a Broncos drive midway through the fourth quarter, allowing Wilson and Denver to march 80 yards for a go-ahead touchdown.

Jimmy Garoppolo threw an interception on the ensuing possession, intending to hit Deebo Samuel in traffic. After the 49ers’ defense forced the Broncos to punt, Garoppolo got another chance to lead a game-winning drive, but the ball was punched out of Jeff Wilson Jr.’s grasp after he caught the ball on a checkdown, and Denver recovered to finish off the game.

Here’s what coach Kyle Shanahan and the 49ers’ players had to say after the game:

It kind of went exactly how we wanted in terms of moving the ball and some big plays. But had a number of penalties that I thought hurt us in the first half and then we didn’t convert a third down.

I thought we made too many mistakes today.

That was a tough situation that I put him in, that unblocked guy coming.

On shouting at the officials on the 49ers’ final possession before the fumble:

From where I was, I thought their three-technique jumped a couple plays before that.

I thought he played real well in the first half. I mean, I thought he made some plays, hit the ones that were there and then made some that weren’t there…

In the second half, I don’t think anyone on offense did good, including myself.

That’s what Russ does. He’s real good at that stuff and we help him for a while but it’s tough to keep doing that all game.

He ran hard. Had some real good runs early but just couldn’t get anything going in the second half.

It was altogether a sloppy day. We had, I think, one clean drive and got points off of it.

We just were not in rhythm. Started off pretty good, too. I felt like we were in a rhythm early and then we kind of just got away from it.

The leadership that he brings to this team, the poise and everything he brings, it’s probably tough to replace that but we got to.

On adjusting back to game shape

Oh yeah, my arm’s feeling it right now. I mean, I tried to do all the practice and preparation down on the sideline, being the No. 2 and then when you get tossed into it, you just got… I didn’t go through OTA’s and training camp. I’m not trying to make excuses or anything but I just gotta get in game shape and get rolling.

It wasn’t the same in the second half. They didn’t really change up too much throughout the game.

We were preaching that all week, make sure we finish the game, don’t let him get out of the pocket and do the things he does best. And we did a good job for a good portion of the game but we just got to be more sound in our rush lanes and be a little more sticky in coverage.

I just shot through and… and didn’t trip him.

Just get home. We get an extra day this week, so that’s going to be big for us after a tough fame like that. But yeah, we’ve been here before and it’s just part of the game. It’s never easy, and I think our team’s built for that.

We have really good players at a lot of positions and I thought guys played well tonight. The effort was there. We didn’t execute very well.

I didn’t feel a disconnect at all. Didn’t really feel a change at all. I mean, this is my first game this year and my last game last year was with Jimmy as well. So it wasn’t really too big of a change for me.

They gave up one touchdown tonight. They gave up six points, really, and we gave up two points… as an offense, we have to put more than 10 points on the scoreboard.

On how defense played:

We talk about it. We have to play a full four-quarter game. That last drive, we can’t let them get down there and score like that. Also, we have to get the ball back for the offense. You lose every time minus-three (in turnover differential)

We had a couple opporutnites, and had even more to attack the football and it didn’t go our way tonight.

Having played him multiple times, you know you have to play four quarters with him. It takes one or two plays. He made the plays at the end to get them the score they needed.

I’m not worried at all. I look first at what we could have done better on defense. We could have helped them in certain areas

It all comes down to the ball, forever in time, it’ll come down to turnover margin. When we have a goose egg on our side, it will be tough to win.