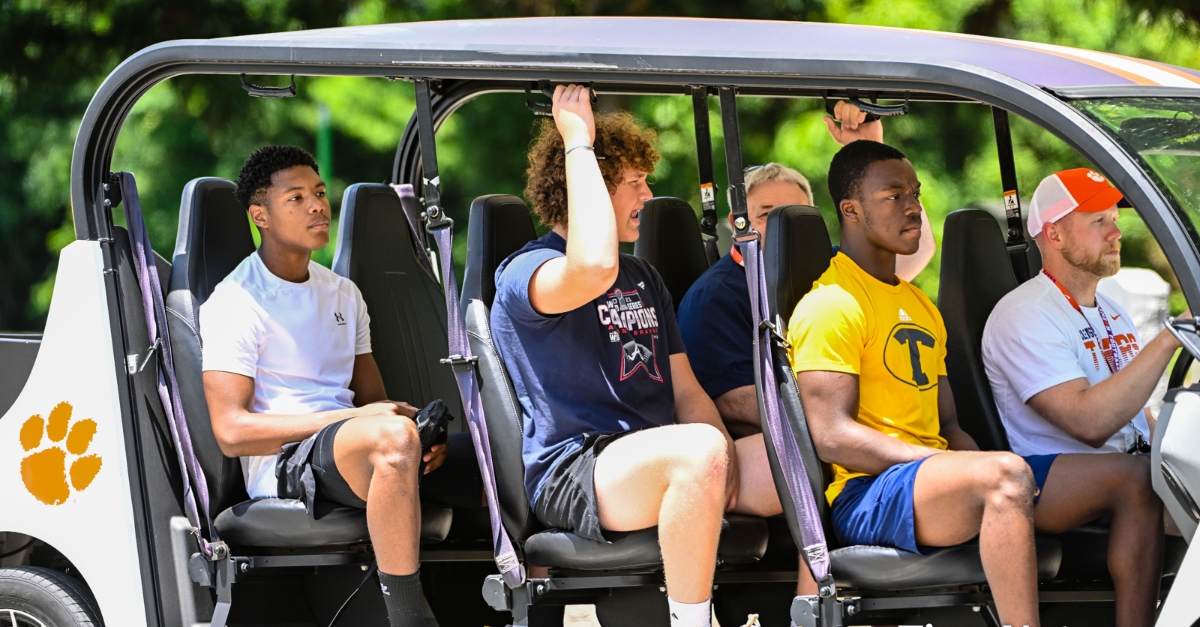 Clemson hosted a number of prospects on Saturday.


CLEMSON – Saturday’s afternoon session was a little more of what we’ve been used to seeing at
Dabo Swinney’s high school camp.

As temperatures soared the number of campers began to swell, and two of the early arrivals made their entrance on a golf cart with recruiting assistant Zach Fulmer. Four-star linebacker Qua Birdsong and 4-star safety Noah Dixon, both of LaGrange (GA) Troup County, were on hand. Birdsong is a 2024 prospect with offers from Ole Miss, Georgia Tech, and Notre Dame.

Birdsong’s slim – standing in at 180 pounds – but has plenty of room for added weight on his frame. Dixon received a Clemson offer back on June 1.

*At the defensive tackles spot, Champ Thompson worked out under the watchful eye of defensive tackles coach Nick Eason. Thompson, a 2024 4-star out of Norcross (GA) Meadowcreek, walked away with a Clemson offer. His offer list also includes schools such as Alabama, Florida State, Georgia, Miami, Notre Dame, Oklahoma and Oregon.

*Another defensive line prospect on hand – was 2024’s Malik Blocton. He didn’t work out. Auburn and Arkansas stand as his biggest offers.

*At the wide receiver spot, I came away impressed with a 2025 prospect with a ton of potential. John Simmons (6-4, 175), out of Myrtle Beach, worked out with wide receivers coach Tyler Grisham. He has a long stride and a great burst off the line. He also plays basketball and is still raw in some spots, but getting him on campus and letting him work with Grisham is big.

*We were looking for 2024 4-star offensive tackle Kam Pringle of Dorchester (SC) Woodland. Pringle, who received a Clemson offer 10 days ago, didn’t work out. He spent time with the coaches, including head coach Dabo Swinney, before leaving about midway through the session. (I walked out when the 1-on-1’s started and he walked out with me). He was on hand with his uncle. More on his visit later.

*Interesting coaching nugget – corners coach Mike Reed watched one corner go through a drill in which the backpedal was used, and told the prospect to jump rope one-legged. He told him that he had to use three steps to change direction coming out of the backpedal when he should be using two. He said that wasting a step at this level can be costly. He then told him to get rid of the rigor mortis in his hands – he clenched his hands like Fred Sanford and his arthritis – and told him to relax.

*I’ll have more later, but did want to drop another note. There was a family there that made the trek from Sacramento, California, with two 2023 prospects (one a defensive back and one a running back). They’ve been to camps at UCLA and Southern Cal, but he wanted to bring them east and thought Clemson was the perfect camp to get them seen. It’s amazing how far people will travel for these camps.

*I will have more later, and we are back at it in the morning at 9 AM.

Mike Sherm Is The Richest Rapper In Northern California

Have skills, will travel – UND Today

GET FREE UC IN BGMI | BEST UC APP FOR BGMI